Earth Enterprise has developed a carbon calculator that computes the carbon footprint of any printed job. This calculation includes every aspect of production from the initial stages of making the paper to the final stages of finishing or distribution. Earth Enterprise then offsets the emitted carbon thus rendering the job carbon neutral. There are several ways of carbon offsetting, some more effective than others.

After extensive research, Earth Enterprise has discovered the most effective way of eliminating our carbon footprint is by planting trees, more specifically “useful trees” also called UTs. UTs are trees whose value is greater than their timber alone, thus almost entirely eliminating the possibility of these trees being cut down. UTs produce valuable commodities such as macadamia nuts or the noni tree leaf, which is sold for $25 a bag to pharmaceutical companies. Deforestation is a serious global problem. Cutting down forests releases huge amounts of carbon dioxide into the atmosphere. In small, primarily poor countries, like those in Central America, these emissions are comparable to our country’s use of fossil fuels. Earth Enterprise buys UTs in Central America, which provides jobs and supports economic development for the impoverished, indigenous people; helps prevent the loss of bio-diversity and soil erosion; helps prevent landslides and flooding; and reduces the amount of carbon dioxide in the earth’s atmosphere.

Earth Enterprise purchased 1000 UTs in June of 2009 which we are using to offset production and make our jobs carbon neutral. We use only clean or vegetable-based inks, encourage the use of recycled or chlorine-free papers, produce everything locally, and now offer 100% carbon neutrality at NO extra cost to you, our client. 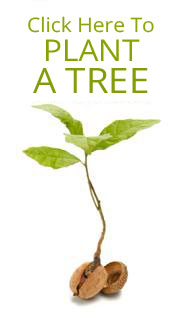